What is Guerrilla Marketing? Here Are Some Fun Examples

Guerrilla marketing isn’t as intense as you think it is, even though the term itself conjures images of rebellion and uprising. In the marketing world, it is considered as an unconventional form of inbound marketing that helps raise brand awareness among large audiences.

So what is guerrilla marketing? Guerrilla is originally a warfare term that employs tactics, depending largely on the element of surprise. What you can expect is a type of unconventional campaigns that attracts people on their daily routines.

guerrilla marketing was first introduced by the late business writer, Jay Conrad Levinson in the early 1980s. He wrote several books about guerrilla tactics that can be employed in a professional way. Though the tactics were modified over the years, the goal remains intact in making an impact to a larger audience.

Today we learn tips from everyone, even from Hillary Clinton.The good thing about guerrilla marketing is that it is low cost in nature, so you only invest your creativity and intellectual implementation. Michael Brenner summarized the style of marketing in a similar context as repurposing your existing content, such as scooping essential segments of a report, and expand each content through a blog post. If you look at it, it is more of an investment of time than money.

One good example of guerrilla marketing is what Bounty did throughout the streets of New York and LA. They installed life-sized messes such as a giant melting Popsicle and a huge knocked over coffee cup. Their advertisement was truly creative and grabbed the attention of the people passing by – all done by using very minimal words. 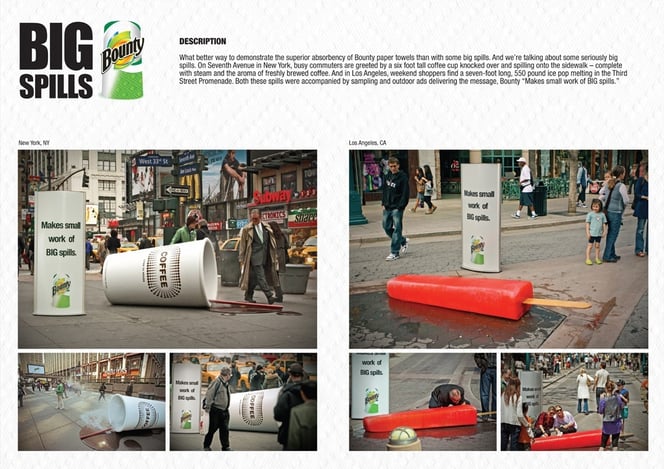 You might wonder if placing a billboard would do better, since it is what most marketers do today. But there’s a big difference, especially in knowing that people today opt for every possible way to remove ads in their lives – and that includes you.

To promote their nominees for the category of Album Of The Year, GRAMMY created a unique video that shows what could happen if posters actually sing. It became very effective because you don’t see wallpaper advertisements move. In this example, just remember that something that awakens curiosity gets people’s attention.

This example isn’t really a cheaper one because it requires some technical work in the process, but its impact to audience would be greater than to a sea of still ones posted or hanged on the walls.

The Frontline created a stunning photo you would not believe at first glance. It’s an image of a dog that is feasted by fly-sized humans. At first glance, you would really think that those are flies, making the dog feel itchy, yet when you look closely, they are actually humans! Creepy as it looks, this dog-and-insect illusion is hard to miss and you can’t help but look twice. 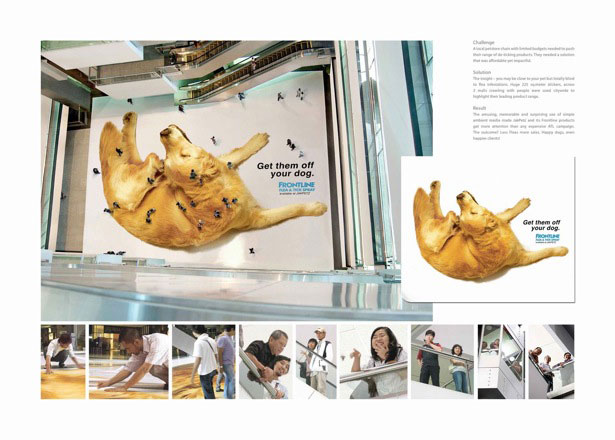 Frontline’s example is more effective than the traditional marketing because it conveys a distinct message that people can’t easily ignore, thus its human interaction reminds the viewers about the importance of the product in the lives of their pets.